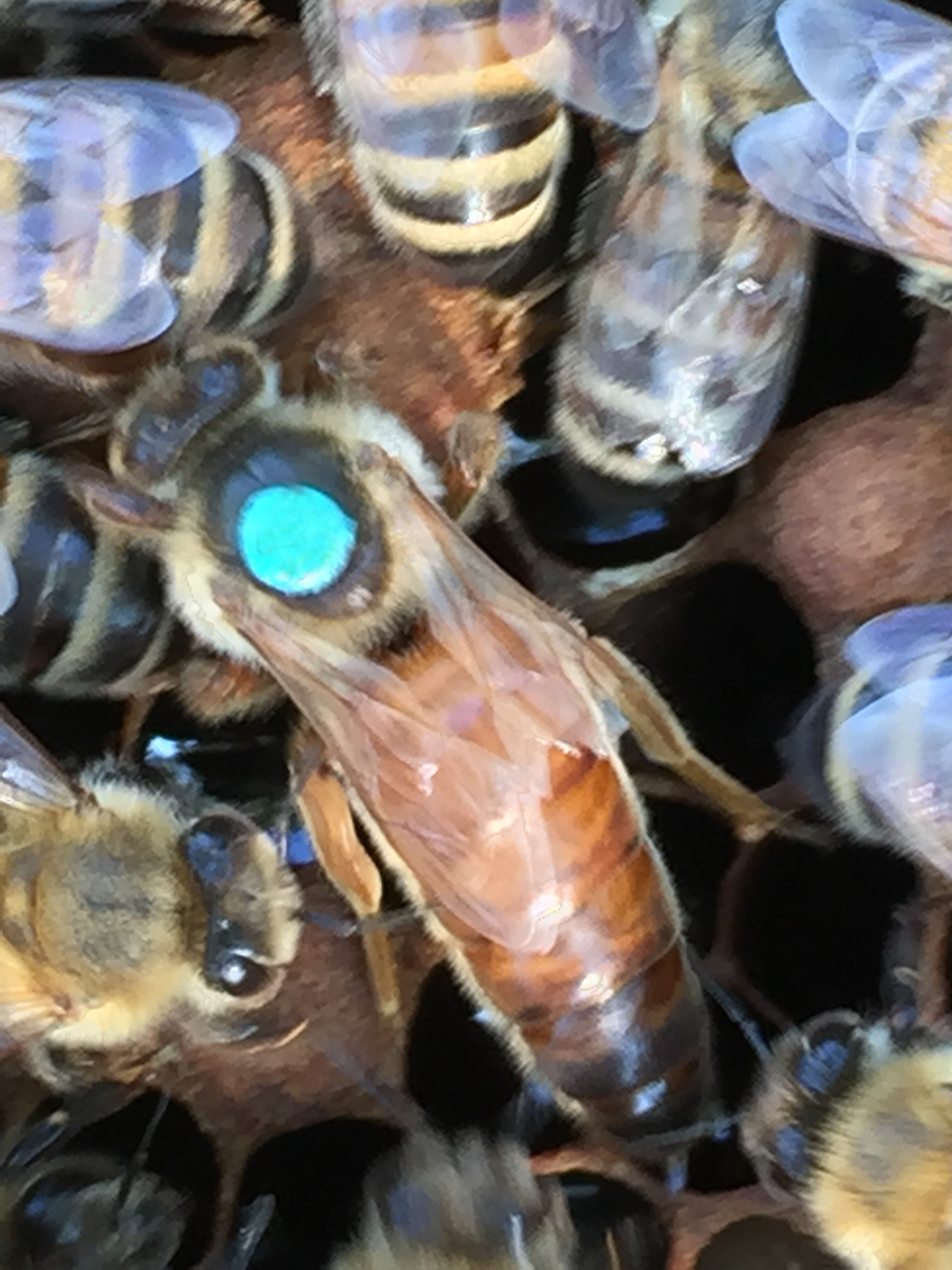 Buckfast bees are inevitably mentioned in the same breath as Brother Adam. Is nevertheless brother Adam, with civil name Karl Kerle, the father of the Buckfastbiene.
What does the term Buckfast bee mean? This subspecies belongs to a number of species in the family Real Bees (Apidae), within which it is a representative of the genus Honey Bees (Apis). It is a bee belonging to the species of western honeybee, "Apis mellefica."

But the Buckfast bee is not a subspecies created in nature (subspecies are often called breeds by breeders) This bee is a "bee cultural breed" created by crossbreeding and combination breeding. It is a hereditary bee breed that was bred over a period of nearly 70 years by the Benedictine monk, Brother Adam, who came from Germany, at Buckfast Benedictine Abbey (Buckfast Abbey) in Devon, in southwest England.

At the beginning of the 20'igste century, Since 1913 spread in England the tracheal mite (Acarapis woodi). This parasite killed most of the English bee colonies in the winter of 1915/1916. Buckfast Monastery was also affected. In the monastery Buckfast survived 1916/1917 of 46 colonies only 16 the winter.

The majority of the survivors were not native colonies, but either pure Ligustica colonies, or crosses of Ligurian origin. From the surviving colonies of this group, the colony number was increased again to 46, by imports of Ligustica queens.
. The Lingustica bee race proved to be less susceptible to tracheal mites, or even tolerant of this parasite. This led to the fact that in the summer of 1917 Ligusticajungfern could be crossed with drones of the old English dark bee and the apiary of the monastery could be increased to 100 colonies. Among these colonies, one colony stood out for its special characteristics, including very good disease resistance. This colony, which was called B1, formed the basis of the Buckfast bees. Brother Adam was appointed head of the monastery apiary on September 1, 1919. As the head of the monastery apiary, he also familiarized himself in this year with the work published by the Berlin bee expert Ludwig Armbruster "Bienenzüchtungskunde".

The foundations of this book prepared the path of breeding buckfast bees. It became a long way of breeding the Buckfast bees.
One of the first beekeeping centers was established. In order to be able to coordinate the breeding work, brother Adam set up the beekeeping station in Sherberton on the moors (Dartmoor). Unfortunately, this station no longer exists.
A long process of bee breeding was followed by brother Adam. The most important work was the constant observation of the breeding colonies. With a very strict and merciless selection the best queens were determined. This is strictly coupled with an evaluation system. This system is still unique and is the basis of the selection of Buckfast bees. The application of this evaluation system by every beekeeper to his honeybee could also bring the "landrace" forward. Unfortunately, this knowledge is not yet widespread in beekeeping.

Example of the evaluation of a breeding dam birth year 2017

This basic strain, the Buckfastrace, was now modified by other breeding strains, by observing these strains in parallel for a long time and making selections to reinforce the desired characteristics and to exclude the colonies with undesirable characteristics from the progeny. Thus, a large number of crosses were created, but only a few were really suitable for integration into the main strain. However, no new traits were bred here, but the existing traits, are intensified in this process. Breeding is also not gene manipulation / gene modification as is often assumed. The beekeeper can use only the naturally occurring active genes to find queens that have special properties more pronounced.
To give just one example, in 1930 Brother Adam initiated a queen breeding program that produced 1200 queen bees. It was a cross between Ligustica queens and Buckfast - drones. Brother Adam knew, however, that only queens with a certain coloring could possess the desired characteristics (coupled inheritance). Thus, only 200 queens were left, which he placed at the mating site for mating. The 1000 remaining queens were discarded.
This was the breeding strain that was integrated into the Buckfast main strain in 1940
. ( combination breeding ).

In1948, Brother Adam was able to break new ground with the introduction of instrumental insemination. From 1950, Brother Adam now began to observe the bee strains on the mainland, Europe. He traveled the European countries, France, Switzerland, Austria, Italy, Sicily and Germany, his birth country, to be able to study the local bee subspecies and regional breeds in great detail. He took numerous queens to England, where he subjected them to rigorous testing. He continued his study of different bee origins in 1952, traveling to Algeria, Israel, Jordan, Syria, Lebanon, Cyprus, Greece, Crete, Slovenia and the Ligurian Alps.
To look for bee colonies that have special characteristics to be able to integrate them into his Buckfast bee
. That same year, Brother Adam carried out crossings with the bee breed Cecropia, which proved to be extremely docile and swarming.

In 1959, this crossbreeding is also integrated into the main strain of Buckfast bees.
In the same year, brother Adam, visited the Iberian Peninsula, Spain and Portugal to sift through more breeding material.
1960 / 1962 Anatolian queens are mated with Buckfastdrohnen and this connection 1967 to the Buckfaststamm einverleibt. We continue one of these breeding lines the Sinop62 even today in our breeding program.
He continued his travels in search of the "bee" in 1962. He visited the countries of Morocco, Asia Minor, Turkey, the Aegean islands, Yugoslavia, Egypt and the Libyan desert.
From 1982 he begins crossbreeding experiments with the Athos bee. In 1989, after a trip to Africa, he begins experiments with the Scutellata and Monticola bees.
Unfortunately, brother Adam could not finish this work and integration into the Buckfast main tribe. His advanced age and the associated senility prevented further trips. On 1 September 1996 brother Adam died with 98 years.
Today the breeding work is continued Europe-wide by the national federations of the Buckfast breeding communities. These national federations are united in the community of the European Buckfast beekeepers (GdeB). The GdeB coordinates the breeding work of these beekeeper associations. The beekeeping community has opened numerous Buckfast occupancy sites throughout Europe, which enable controlled and safe preservation as well as further breeding of the Buckfast bee.

Also by us an occupation place for the breeding of the Buckfast bees is operated, this is in the Annaburger heath and is with the abbreviation anbh in the Pedigrees to find. For more information, visit www.Buckfast-Belegstelle.de

A few words about the Buckfast bee and Carnica bee:

Conclusion: every beekeeper who wants to achieve good honey harvests with little effort should definitely dare to try to keep Buckfast bees, he will not regret it. The keeping of the Buckfast bee is closely connected with the Dadant hive, the way of operation in the 12`er Dadantbeute US-modified farerntwiecklet by brother Adam is for many occupation beekeepers the bee dwelling jokingly called the hive "which makes the honey itself". As a Buckfastimker is current about the Internet sites of the regional associations ( beekeeping association ) to learn. In Saxony it is the state association Sächsischer Buckfastimker e.V..

As a registered breeder in the breeder list of the GdeB, we offer Buckfast queens from our breeding program. This is done as F1 queens as Standbegatte Königinn from our breeding mothers or Belegstellenbegatte queens with pedigree. The Buckfast beekeeper can order them through our online store, by e-mail or simply call us, the easiest way is online. To keep our breeding lines always up to date we visit the island colonies Baltrum and Greifswalder Oie.
How we use cookies and other data

By selecting "Accept all", you give us permission to use the following services on our website: YouTube, ReCaptcha, PayPal Express Checkout und Ratenzahlung. You can change the settings at any time (fingerprint icon in the bottom left corner). For further details, please see Individual configuration and our Privacy notice.

The settings you specify here are stored in the "local storage" of your device. The settings will be remembered for the next time you visit our online shop. You can change these settings at any time (fingerprint icon in the bottom left corner).

To submit forms on this page, you need to consent to the transfer of data and storage of third-party cookies by Google. With your consent, reCAPTCHA, a Google service to avoid spam messages via contact forms, will be embedded. This service allows us to provide our customers with a safe way to contact us via online forms. At the same time, the service prevents spam bots from compromising our services. After you gave your permission, you might be asked to answer a security prompt to send the form. If you do not consent, unfortunately you cannot use the form. Please contact us in a different way.

Using express checkout and Displaying offers for payment in instalments for individual items or your entire purchase.

Would you like to see these contents? Activate the desired contents for one session only or allow the website to remember these settings. Once you have given your consent, the third-party data can be loaded. For this, third-party cookies might be stored on your device. You can change these settings at any time (fingerprint icon in the bottom left corner). For further details, please see the Privacy notice.